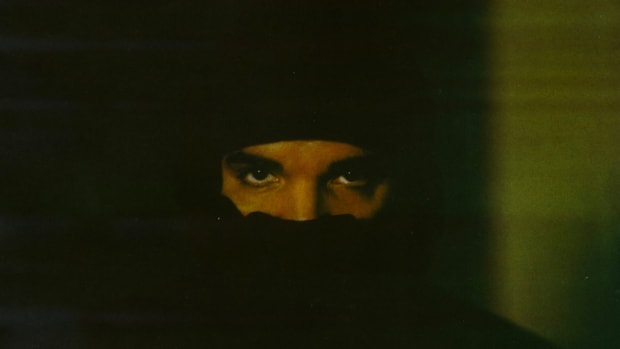 Drake delivers a fan service release during quarantine, allowing him to clear out his vault of throwaways, loosies, and leaks.

The world stood still on February 13, 2015, when Drake released his surprise mixtape If You’re Reading This It’s Too Late. I remember the hair on my neck standing straight up during the intro track. It was a big moment for Drake. He believed he reached the status of legend, and the release of IYRTITL showed us that he wasn’t afraid to say it.

In usual 1-Listen album review fashion, the rules are the same: no skipping, no fast-forwarding, no rewinding, and no stopping. Each song will receive my gut reaction from start to finish.

It’s always nice to hear a background sample on a Drake intro. I just looked at the album cover and laughed. Why does Drake look like a cat burglar? Whose house is he breaking into during quarantine? “Deep Pockets” sounds like a throwback. This song is like watching a veteran ballplayer shoot from his old sweet spots on the court. I’m not in love with the production, though. “Deep Pockets” is dragging. “My soundtrack is the second Carter.” Drake is getting bars off. I’m listening to a graceful layup, but I’m here for the 360 windmill dunks. I’ll revisit it.

The “Song Cry” sample sounds heavenly. This is a good canvas for this variety of Drake. I respect how much he big ups Birdman and Wayne. There’s a sense of sincerity to his stream of consciousness. He’s saying what’s on his mind. This is my favorite kind of Drake. Just a free-flowing diary of thoughts. “When To Say When” is the most elegant rant Drake has ever rapped.

Giveon’s voice. That’s it, that’s the tweet. Drake’s conversational flow is working well because he raps with a photographer’s attention to detail. What I like about “Chicago Freestyle” is how the beat, Drake’s flow, and Giveon’s feature complement one another perfectly. There’s a synergy that makes for a graceful banger.

A slow cut. I like the production. There’s a looseness here that’s atmospheric. Drake’s singing is conversational. Not in love with this one, though. I’m too sober for “Not You Too.” The pace of Dark Lane Demo Tapes is pretty slow. Drake is in no rush. I love the sudden drum rolls and synthy textures. Drake is sweet singing to some woman, but I’d rather have another elegant scolding. I don’t know if Chris Brown did anything. If he appeared, I might’ve missed him. [Editor’s Note: He sang background vocals.]

“Toosie Side” is no “Swag Surf” was my initial take when Drake released this song, but I’m not upset at another dance song. Okay, I might change my mind. I can’t imagine any reason I would play this song. I do love how he snuck the subtle imagery of plotting violence. “Gotta dance, but it’s really on some street shit.” Mafia music for the suburbs of Pasadena. Is this the extended version? “Next time I swear the truth will get revealed.” Drake is still alluding to things. I can’t imagine Drake getting in another rap beef. No one wants that, and I don’t want this extended “Toosie Slide.”

All these songs sound good, but I hear why they’re loosies. They sound like good ideas that weren’t great. Future! It’s nice to hear another voice. His flow on here is a treat. It’s the way he launches into a sudden tangent without ever losing the cool. Future and Drake really get together and scold women. “Desires” is fine. It’s a vibe. I wouldn’t skip it, but I don’t love it. After a decade of Drake singing, I’m okay if he only raps for here on out.

I love this beat. Easily my favorite track thus far. The hi-hats are tapping with such eloquence. A great mid-tempo rhythm. The singing rap style here is great. It’s so steady, like a leaf floating on the top of a river. Drake is in a good pocket. Something that he does well is bringing his life to the song and still making it feel like something you might experience. He attempts reliability. As soon as I complain about his singing, he pulls out “Time Flies.”

The bounce! It’s a trampoline. This is good. Drake’s stunting is whimsical. He has the braggadocio of a winner. Drake is running through women like Charlie in the fifth season of Californication with the way he’s rapping. That’s a reference for Donna. “Landed” sounds like a More Life leftover. “Pushing five Cadillacs like a politician.” “Landed” is the sleeper hit. Keeper.

I’m liking this build-up. Thugger! The beat is vibrant and springy. Future and Thug together are two stylish supervillains. “D4L Freestyle” is the best song title on the album. Young Thug vocals are hilarious. Drake is ripping this. He sounds like he’s having a great time. The Spaceship/Bankhead line. Some of his best rapping on the album. Here’s Future. Future is making the money counter sound with his mouth. Has he been practicing that? It’s such a perfect money counter. Not in love with the beat, but Drake went to outer space.

Drake’s throwaways are good. Dark Lane Demo Tapes is the opposite of If You’re Reading This It’s Too Late. Instead of feeding us aggressiveness, Drake’s energy is Sunday morning relaxed. His voice is impeccable here. The most casual rapping. Pi’erre Bourne’s price going up, again. Carti’s ad-libs are killing me. Southside Carti came to dunk on Drake. His voice is stealing the show. How does he get his voice that texture? He sounds like a cartoon character. Reboot the Rugrats with Playboi Carti as Tommy Pickles. Keeper.

It sounds like an older gentleman talking to his Instagram. [Editor’s Note: That older gentleman is Drake’s father, Dennis Graham.] I like this not-an-album. It’s perfectly okay. Dark Lane Demo Tapes is a playlist of slow-burning Drake vibes. I’m post fascinated with the pacing. “Losses” is dragging. Rap has felt so fast in 2020. There’s a clarity to Drake that I like. He makes sure you see his point of view. Ironclad rapping. He doesn’t miss a detail. It’s the lyricism of a politician. The day he decides to run for office will be a wild day on Twitter. Another elegant scolding. Keeper.

I love the bounce. Love the Static Major nod. This is the one. There’s a few hit records on this album if Drake wants them to be hit records. “From Florida With Love” feels like a banger. He loves executing subtle threats on potential bangers. “You know that lesson stuck.” I didn’t need the second verse. I might be tired. This one would sound great in a room full of people.

This summer, I need Drake to give me a 30-minute LP. I’m getting too old for 50-minute sermons. I miss Pop Smoke. Been thinking about him a lot lately. Sighs. Drake can do any style of rap, but Drill Drake is hit or miss to me. He’s sliding on “Demons.” This is some of the most aggressive rapping on the album. Fivio has good energy. Drake always finds a young star to spotlight. “Demons” could’ve been a strong single. Sosa Geek is fine. He got character. “Demons” is the banger that feels a little late to the party.

“War” is a Drake song I feel indifferent about. It sounds awkward, but I love how the words bend to his flow. It’s a slick song. The lyricism is an example of Drake’s best kind of stream of consciousness. He doesn’t miss a beat. Even the way he described The Weeknd is like a mob boss speaking in code. “Everyone I know has code names.” Drake sounds silly at times, but he puts up enough shots to always strike gold in various styles. A true shooter.

The title Dark Lane Demo Tapes is spot on. Drake has delivered a fan service release during quarantine, allowing him to clear out his vault of throwaways, loosies, and leaks.

There is no attempt at a crossover pop song or shiny, big-budget radio record. Dark Lane Demo Tapes is a playlist project filled mostly with surface-level rap tales by a rich and famous superstar who can craft a hit—any type of hit; you name the type—in his sleep. And some of these songs (“Desires,” “Not You Too”) sound like he did.

As a variety pack of mostly effortless rapping and R&B throwaways with only a few potential Billboard chart-toppers, Dark Lane Demo Tapes presents as 50 minutes of graceful layups from a living legend. Drake didn’t feel the need to surprise us with a dunk. Sure, a 360 windmill would have been nice. But for that, we’ll have to wait for album number six.

Signup for news and music downloads!